Day three was full of adventures and new experiences for our team. Tomorrow is our last day of camp, which is one day shorter than last year due to Latvia’s annual mid-summer celebration. We will hopefully provide an update for the mid-summer celebration, which we have the opportunity to attend this upcoming Friday/Saturday. Let’s get into day three!

Our team is slowly adjusting to the time difference by waking up later and later (today we woke up at 7). Everyone was mostly on their own morning schedule due to sleeping in longer but we all made it to the Olympic center on time. For anyone curious about the temperament of the rat birds…they were well behaved. 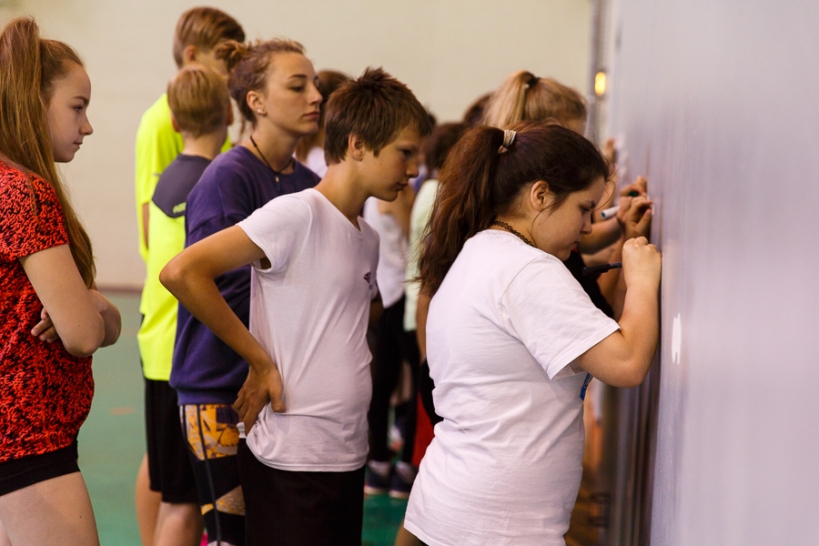 The coaches and the campers definitely fell into a rhythm during day three. The campers knew the daily routine and some of the drills that we would repeat to reinforce, as well as the warm up and cool down sequences. Because of this, the campers started to become bored by the end of the day (they are in middle school after all). Tayla and Laura did a good job mixing the activities up to keep the campers engaged and enjoying the process of learning how to play volleyball.

The campers are progressing in their volleyball skills considerably. We have subtly divided the campers into skill groups today in order to maximize the efficiency of their progress. Laura and Tayla intentionally include entire group activities and drills as well to have campers get to know one another better.

We were missing two members of our crew during the morning session. Carol and Marci had the opportunity to visit Uljana Semjonova, the greatest basketball player in Latvian and Russian history. During Soviet occupation of Latvia in the 80’s, Latvian born Semjonova played for the Soviet Union. She is 7ft tall and never lost a game in her 18 season career. Carol will be writing a special blog about her interaction with Semjonova, but I will give you a hint that it was good enough to get all of us invited back to visit on Monday.

Our breakfast and lunch times are becoming more socially interactive with each day. It is interesting to ask them questions about what types of things they enjoy doing and how they were raised. Our team typically splits up as much as possible during meals to spend more time with the campers.

During the post lunch portion of practice we played interactive games with the campers and Tayla and Laura shared a story from their time as volleyball players at Oregon State. They told the campers about the struggle of having a winless season to making it to the sweet sixteen (which was the best performance in OSU volleyball history). During the post lunch time we have also been playing a series of “I am second” videos for the campers to watch.

When camp concluded we were picked up by Kristaps, who used to be an integral member of the Latvian link team with Mathews and Suburban. He drove us from camp to a go-cart facility, where our entire team (including Erik) had the very unique opportunity to race go-carts with Kristaps. To give you a better idea of how it went, I will put a sentence that most likely describes each individual’s experience during our time at the facility.

Carol Schaudt: “Slow and steady does not win the race”

Marci Bacho: “I should have been a race car driver”

After go-carting we went back to Lido, a buffet style restaurant with endless possibilities of excellent Latvian cuisine. It was nice to spend the evening with Kristaps, who before today we had never met. He is now added to our long list of amazing friends from Latvia who have provided unbelievable hospitality to our team.

As we go into our last day of camp tomorrow, our hearts are set at having once last opportunity to strengthen relationships and build new ones. Emotions will certainly be high as we have assuredly grown closer this year to the campers then the year before. We look forward to updating you tomorrow for our last day of volleyball camp!